Where did I get it? The local library

Summary: Bridge is an accident survivor who’s wondering why she’s still alive. Emily has new curves and an almost-boyfriend who wants a certain kind of picture. Tabitha sees through everybody’s games—or so she tells the world. The three girls are best friends with one rule: No fighting. Can it get them through seventh grade?
This year everything is different for Sherm Russo as he gets to know Bridge Barsamian. What does it mean to fall for a girl—as a friend?
On Valentine’s Day, an unnamed high school girl struggles with a betrayal. How long can she hide in plain sight?

This is one of the first middle-grade books I’ve read in a while but I found myself thoroughly enjoying it.

This book has fast become one of my favourites of all time and I even went around wearing cat ears for a few days to commemorate my new found love. (Read the book to see what I’m referring to.)

Tabitha and her friends were so engaging and their moments were filled with laughter and fun as well as the occasional tears and misunderstandings that made the book all the more realistic.

Goodbye Stranger was just perfect for a mostly light read with a serious and thought provoking messages laced throughout.

Where did I get it? I bought it 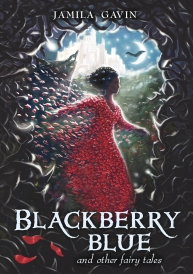 Here are six magical stories to thrill and enchant you. Watch Blackberry Blue rise from the bramble patch; follow Emeka the pathfinder on his mission to save a lost king; join Princess Desire as she gallops across the Milky Way on her jet-black horse.

I raced through this book! I loved was emerged in all of these characters stories and plights and not once was I bored. There were six stories all immensely well written and all with beautiful illustrations to match.

My favourite tale was that of Leyla’s brother who went on a mission to find his sister and defeat the Purple lady. Most of the protagonists were young children but all felt wise for their years and handled everything that was thrown at them immensely well.

Another tale that I enjoyed was Emeka the pathfinder and I especially loved the relationship between the evil queen and her adopted daughter.

I have no doubt that readers will enjoy this book and all the characters will capture your hearts!

Jamila Gavin was born in 1941 in India “in the foothills of the Himalayas”. Her father was Indian and her mother English, and her earliest memories are of travelling by sea between England and India. She came, with her family, to live permanently in England when she was twelve years old. Although she trained as a pianist and worked on music programmes for the BBC, she has become an author of books for children and young people. Her first book, The Magic Orange Tree, was published in 1979 and has been followed by a number of prize-winning publications. Coram Boy won the Whitbread Children’s Book Award in 2000; The Wheel of Surya was the runner up for the 1993 Guardian Newspaper Children’s Fiction Award. Jamila Gavin’s writing often explores issues of class and racism, historical themes and children’s identity and place in society.

Shackleton’s Journey by William Grill; wonderfully illustrated by him, and full of great nerdy facts, like how many huskies he had to go to the Antarctic and all their names.

2) How long have you been writing?

I have loved writing stories and poems all my life, but I was first published in 1979 and have been writing ever since.

3) Where is your favourite place to write?

My Favourite Place to Write            Jamila Gavin
Scribbling, scribbling, anywhere, everywhere,
From Moscow to Delhi, Cairo to Samarkand.
Or sitting at dawn on the No 27 bus
Going down Marylebone Road before rush hour.
Never have my notebook to hand when I need it!
Scraps of paper suffice, or backs of old envelopes.
Even long supermarket receipts are repositories,
Of  ecstatic inspirations or jumbling ideas.
Reminders of characters huddled on pavements,
Remarks overheard with a frown or a glance!
That little dropped stone in the pond of my consciousness
Rippling out as a novel or play.
But my favourite place to write?
Why my study of course, with its Big Bang of chaos;
My computer, my books and my dictionaries all.
My view from the window; my garden-half-wilderness,
And the green leafy calm of my five watchful sycamores.
4) Do you have any more novels planned for 2016?
Yes – I’m working hard on one now which I hope to finish by the end of the year – but it won’t be published till at least 2017. No title yet.
5) What is your favourite past-time?
Playing the piano. Would have said skiing too – but I haven’t been for about 3 years, and now I wonder if I ever will again.
6) Your most anticipated novel of 2016?
I’m waiting with great interest for the third of Hilary Mantel’s trilogy the first two being Wolf Hall and Bring up the Bodies.
7) Which of your novels did you find hardest to write?
The one I’ve been battling with for 8 years, and it’s still not published, and may never be published, but I can’t give up on it yet.

Thank you so much to Jamila for taking part in this interview!
You can find her novel, Blackberry Blue, here and here.

The One Dollar Horse by Lauren St. John

Where did I get it?-I bought it

Synopsis: Fifteen year old Casey Blue lives in East London’s grimmest tower block and volunteers at a local riding school, but her dream is to win the world’s greatest Three Day Event: the Badminton Horse Trials. When she rescues a starving, half-wild horse, she’s convinced that the impossible can be made possible. But she has reckoned without the consequences of her father’s criminal record, or the distraction of a boy with melty, dark eyes, with whom she refuses to fall in love. Casey learns the hard way that no matter how high you jump, or how fast you gallop, you can never outrun the past.

I actually read this book a while back and just re-read it recently. When I first heard this book was going to come out I immediately put it on my Christmas list. I have enjoyed reading all the previous book by this author and The One Dollar Horse did not disappoint.

The main character, Casey, is interesting and driven. All of the characters in this novel were well written and I felt myself rooting them on, especially Casey’s dad who tries so hard to give Casey what she wants.

The romance between Casey and Peter was also very well written and it developed naturally throughout the course of the book. Storm was a lovely horse and I was cheering Casey and Storm on through every challenge they faced.

I would definitely recommend this book.